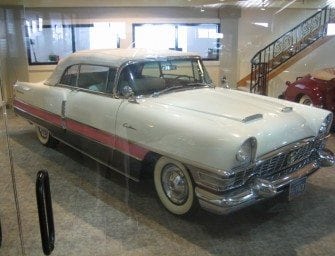 When Packard created the Caribbean in 1953, it gave the storied brand a much-needed jolt of style and prestige that was missing from its regular lineup. Once the most prestigious of the American luxury brands, Packard started in fine shape after World War II but several management miscalculations ended up diluting the brand. By the 1950s, Packard was lacking in style and substance as it continued to use its famous but antiquated straight-eight motor.

It was during this time that Packard executives tried to inject some life for both the benefit of the company and the public with a series of show cars like the Panther and Pan American, the latter which debuted at the New York International Motor Sports Show in 1952. A two-seat custom job that was chopped and channeled, Packard tinkered with the idea of putting it in production, but Packard could not justify production because of the high price it would cost the public.

However, elements of the Pan American lived on in the new-for-1953 Packard Caribbean convertible. Despite being based on the mid-range Cavalier body, there was no doubt this was Packard’s most prestigious vehicle. With fully radiused rear wheel wells conservative use of chrome, and standard Continental kit, the Caribbean reeked of style that Packard so desperately needed. Only 750 were built, but those small numbers helped Packard’s image in spades. For 1954, the Caribbean was elevated to proper senior status, although the fully radiused rear wheel wells were eliminated; however, rear-fender two-toning did help maintain the allure. Sales fell to 400 units, but the Caribbean continued to serve as Packard’s style leader.

Finally, in 1955, with a redesigned product line that was every bit the equal of its competition, Packard came to market with a brand-new V8 finally shedding the straight-eight and brand-new Torsion-Level suspension. Styled by Dick Teague (later to have a long reign at AMC), he gave the new Packards gorgeous “cathedral” taillights, liberal use of colors, and a contemporary face. Continuing as the halo car for the rest of the line, the Caribbean was only ordered by 500 customers. Subtle styling tweaks came for 1956, but the big news was the addition of a hardtop Caribbean; production fell to 276 convertibles and 263 hardtops. For 1957, Packard became a restyled Studebaker – a mere shell of its former self – and was put to rest a year later, a sad end to a proud marque.

This 1955 Caribbean that is part of the Automotive Driving Museum collection is number 8 off the assembly line. According to available records, the legendary Howard Hughes picked up this car at the factory and then had it shipped to Hughes Industries in Los Angeles, where he then presented the Packard to actress Jean Peters, his girlfriend. It is said the couple drove the Packard to Malibu but later parked it in her garage at home in Beverly Hills because she didn’t like it.

Much later, in the early-1970s, Jean allowed her nephew to take the Caribbean out and be serviced, where ADM founder Stan Zimmerman saw it. He asked the owner of the service station who owned the car, to which he replied that it was information that he could not give. However, Stan saw the invoice on the desk and saw the Packard was registered to Jean Peters who, by coincidence, lived around the corner from him. He later paid her a visit and knocked on the door; after he asked about the Packard, she said there was no discussion about the Packard and closed the door.

Several years later, an ad appeared in the paper for a 1955 Packard for sale at Hughes Industries. Stan answered the ad and determined it was the same Caribbean, so he bought it. Currently on display at the Automobile Driving Museum in El Segundo, CA., it only has 1,751 miles on it.