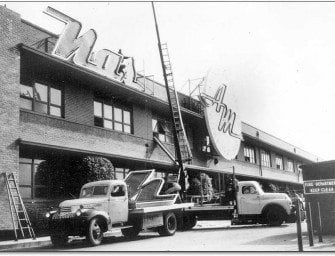 The Nash automobile company was more than just innovative, it was American. With factories located across the entire country, where better to have a factory than in El Segundo, CA, right down the road from where the Automotive Driving Museum is located. The Nash Company lasted from 1916 to 1954.

The Nash factory in El Segundo, CA, was built in 1946, an opened in 1948. The plant was used to build automobiles, which it maintained for seven years. In 1955, Hughes Aircraft purchased the building, converting it a missile assembly and test facility. It’s rumored that Hughes purchased the 500,000 sq-ft factory for $3 million.

Nash automobiles were extremely cutting edge; it was the first manufacturer of vehicles with hot-water car heaters, which drew fresh air from outside the car. Soon after, the brand was the first to offer a single-unit heating and air conditioning system. Also, the 1941 Nash 600 was the first mass-produced unibody construction automobile made in the United States. Nash’s slogan from the late 1920s and 1930s was “Give the customer more than he has paid for.”

The company took pride in offering customers more than what they asked for – putting the customer service in front of the sales. The Nash automobile stood for something few car companies stand for today.

One famous story about the Nash automobile company is its quest to help customers resell their cars. Indeed, the Nash Company is the only brand I’ve ever heard of that switched the model name of one particular vehicle, and then proceeded to mail each owner of the previous model a collection of badges to rebrand the older models into the same name as the newer, rebranded counterparts. Nash admitted it wanted to ensure customers would still get a good resale value for their vehicles when and if they so choose to sell the cars.

In 1954, Nash announced the friendly acquisition of the Hudson Motor Car Company, creating the infamous brand known as the American Motors Corporation (AMC). It was with this acquisition that the brands Nash and Hudson were defunct, and so was born the AMC brand that would eventually be purchased by the Chrysler Corporation in 1987.

The El Segundo Nash factory building itself would later be sold to the GM Hughes. The two businesses which remained in the factory were the Hughes Communications satellite operations and DirecTV.

In 1990, GM sold the satellite business to Boeing who renamed the company Boeing Space Systems. A few years later, the building was resold to DirecTV to News Corp. who recently sold it to Liberty Mutual Communications. Now, the factor is Boeing’s Integration and Test Complex. The building is allegedly producing both commercial and classified satellites and is owned by Boeing Space Systems.

“Once the birthplace of the Nash Rambler, today it is the Boeing Satellite Development Center and, with more than a million square feet (93,000 square meters), it is the world’s largest satellite factory.”

“From the time we turned the former Nash Rambler plant into what now is the world’s largest satellite factory, our company and the people who work here have been making history,” said Craig Cooning, Space & Intelligence Systems vice president and general manager. “Our team of scientists designed and built the first geosynchronous satellite.”

The Boeing Satellite Development Center (SDC) in El Segundo is the largest satellite factory in the world, encompassing more than 1 million square feet. In 50 years, the SDC produced the first spacecraft to make a fully controlled soft landing on the moon; the first spacecraft to penetrate Jupiter’s atmosphere; and provided the radar for the Magellan spacecraft that took detailed images of Venus’ surface.

The ADM is planning a AMC/Hudson/Nash show/exhibit in Oct. 10th, 2015. Please save the date.

Get The ADM Weekly Newsletter