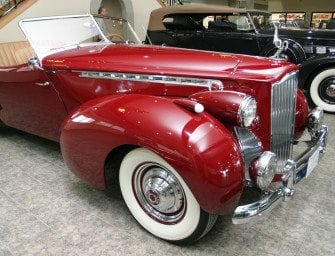 The earliest Packard in ADM’s stable is this 1916 Twin Six convertible, considered the first production V-12 in the world. Producing 88 horsepower from 424.1 cubic inches on a 126-inch wheelbase, this 2.1-ton automobile was produced in August 1916 and delivered to Mr. J. D. Harding of Chicago, who paid around $3,000 for it. The factory slogan back then was “The Twin Six Owns the Road,” and it is not difficult to believe that.

This custom 1928 Speedster was originally built for a Packard dealer in Pasadena. Built on a Series 533 chassis by Thompson Products Company, it was equipped with a 384ci straight-eight with three Strombergs. This unique Packard was discovered in pieces in 1980 and then restored. The Speedster is equipped with Thompson racing grille and Woodlite headlamps.

A bit more stock than the previous Packard above, this 1929 Standard Eight seven-passenger Tourer was Packard’s replacement for the entry-level Six, destroking the senior models’ 348.2 V-8 to 319.2 for this new model. With sales of 17,060 for the Standard Eight, and total production at 47,855, the automaker decided to earmark $100 million for plant expansion and increased production. Alas, Packard knew little what was in store for its economic future…

Ah, yes, the economy – the Great Depression changed everything in America. As a brand catering to the higher end of the automotive spectrum, Packard created a new entry-level Light Eight to give the brand broader appeal. Easily identified by its shovel-nose grille, the 900-series Roadster Coupe disappeared after 1932 because it was costly to produce despite giving consumers an easier way to get into the Packard fold.

Packard redesigned its portfolio in 1935, which also included a second attempt at an upper-middle class car:  the One-Twenty. However, senior Packards continued their graceful ways, as evidenced by this 1936 Standard Eight seven-passenger Tourer. This one was exported to Russia by the U.S. government for Joseph Stalin’s use. After the fall of the Soviet empire, the Packard was shipped to Germany, then the U.S., for restoration.

Compare it with the ADM’s 1937 Packard Twelve convertible sedan, which was the step up from the Standard Eight and Super Eight.

Thanks to the One-Twenty, Packard was able to weather the Great Depression while its top models continued to cater to the rich.

By 1940, very few companies in this price class were left. This custom offering was built by Darrin in Hollywood and is considered a landmark design. Compare it with the ADM’s 1941 120 model, which was Packard’s entry-level eight-cylinder model – this Touring Sedan started around $1,200 versus the Darrin’s $4,570.

A design shift was going on in America for 1941, led by the mid-year Packard Clipper. The One-Ten, One-Twenty, One-Sixty, and One-Eighty series, however, continued to cling on to tradition. This custom One-Eighty Sports Brougham by LeBaron was once owned by industrial designer Brooks Stevens.

After World War II, the public was hungry for new cars. For Packard, it resumed production with an all-Clipper lineup, giving all Packards the modern, integrated look introduced in mid-1941. The lineup started with the Clipper Six on a 120-inch wheelbase, then the Deluxe Clipper Eight. The senior Super Clipper and Custom Clipper Eights had seven inches more wheelbase. This is a 1947 Super Clipper Club Sedan.

In 1948, Packard debuted its first post-war design, which was referred to as “a dowager in a Queen Mary hat” by Tom McCahill. A redesign for 1951 helped, but the Cadillac was far more stylish. To help modernize Packard’s image, the company commissioned Pininfarina to create a proposed concept car for limited production. In the mid-1980s, a Packard fan discovered blueprints of this proposed vehicle in Paris, then commissioned the build of the car you see here.

For 1955, Packard finally had a contemporary car that was the equal of Cadillac, although it was a severe redesign of the 1951 car. The newness was more than skin-deep, however, as a brand-new V-8 and Torsion-Level suspension made Packard perhaps the most roadable luxury brand in America. The Caribbean topped the offerings, often featuring tri-tone paint but, alas, it was too late for Packard to survive much longer.

Starting in 1957, Packards became “Packardbakers,” which were Studebakers with Packard styling. For 1958, Packard’s swan song, the automaker introduced the Hawk, a twin to the Studebaker Hawk but with a catfish-like grin. Power came from a supercharged version of Studebaker’s 289. Only 588 built, and subsequently becoming one of 2,622 Packards built before production ceased.