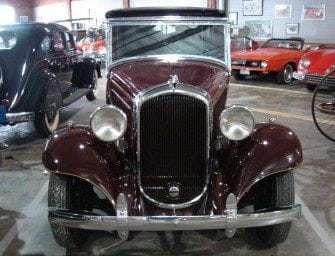 The Automotive Driving Museum (ADM), located in El Segundo, CA, is home to many great, historic vehicles. One of its prized possessions is not just an antique, collectible American-made automobile, but also previously owned by a Head of State. The 1932 Plymouth Brewster Town Car located at the ADM was once owned and operated by Eleanor Roosevelt.

Franklin Delano Roosevelt (FDR) is well-known for entering the political spotlight in 1910 when he made his first attempt at solidifying the office of the New York Senate, coming from Dutchess County. Attempting to attract the attention of the younger voters, as a brand-new democratic politician, FDR rented a sporty, red 1910 Maxwell touring car. This vehicle he nicknamed the “Red Devil,” with its open-top, he was able to sit or stand in the car while giving quick speeches on the move.

FDR’s most well-known political achievement is the New Deal Coalition. He was insurmountable with his goals to realign American politics after 1932. It was his New Deal policies that defined American liberalism for the middle third of the 20th century. FDR’s first 100 days as President of the United States of America, which began March 4, 1933, began with executive orders that instituted the New Deal – programs designed to institute government jobs for the unemployed, stimulate economic growth, and regulate Wall Street, banks and transportation.

FDR is also most remembered as having worked closely with British Prime Minister, Winston Churchill, and Soviet leader, Joseph Stalin, in leading the Allies against Germany, Italy and Japan in World War II. His goal was to make America the “Arsenal of Democracy,” which would supply equipment to Allied forces. With the support of America – coast to coast – FDR waged war on Japan and Germany after the Japanese attacked Pearl Harbor on December 7, 1941. He called the tragedy a “date which will live in infamy.” It was with FDR’s vision that the entire United States’ economy was focused on the war effort, manufacturing the needed equipment to fight the war. He led the war effort, defeating the Axis Powers.

Visibly, FDR is known for contracting the Polio disease, a highly infectious disease caused by a virus that invades the nervous system and can cause irreversible paralysis in a matter of hours. FDR had limited mobility, restricted to a wheelchair. It was because of the Polio disease that FDR began to only ride in open-top vehicles. This was mainly for easier access in and out of the vehicle. It also served a great purpose of staying close to the general public while traveling through crowded streets. It was not uncommon for FDR to give interviews and speeches from his automobiles.

The Plymouth brand of the Chrysler motor car company began in 1928; by the early 1930s, the company was producing upwards of 12 different models. Enduring the market crash of the late-1920s, and the significant blow to all automotive manufacturers of the Great Depression, the Plymouth division rose within the top-three selling automotive brands in America. Plymouth had beat out Ford as one of the top three, a first time any company had beaten the goliath manufacturer.

Meanwhile, Brewster & Company, an American coachbuilder, active from 1810-1937, was nearing the end of its tenure at the top of all luxury automotive manufacturing. The coachbuilder had, at one point, built its own line of lavish and luxurious automobiles at their plant in Long Island City from 1915-1925 and 1934-1935. The company was most notable for producing extremely exotic bodies to sit atop other manufacturer’s chassis. Each body was custom and generally one-of-a-kind.

Early into his Presidency, FDR and Eleanor Roosevelt were in need of a vehicle for their “Little White House,” in the Warm Springs, Georgia, FDR’s personal retreat. FDR, an avid collector of exotic automobiles throughout his life, generally enjoyed driving extremely fast. Most of his vehicles were convertibles due to his disability, Polio; he was unable to use his legs while operating a vehicle. For this very reason, all of FDR’s vehicles were modified with the very first hand-operated throttle and brake controls for a motor vehicle.

It’s difficult to pinpoint all the specifics of this miraculously pristine, early-1930s Plymouth; from the price to the hands that built the body, very little is known about the vehicle. The Brewster & Company coachbuilder kept impeccable records of its clients; however, the Roosevelt family is not listed.

The 1932 Plymouth Brewster Town Car sports a 4-cylinder engine capable of 65 horsepower at 3,499 rpm. The total engine displacement is 196.1 cubic inches. Every pony is harnessed through a 3-speed, manual transmission. The hardware doing the stopping is a 4-wheel, hydraulic system. The Plymouth stands with a wheelbase measuring 112 inches, weighing in at a total of 2,975 pounds. Due to the short wheelbase, and relatively low weight, it’s likely this car would have satisfied FDR’s hobby of driving fast. The truth is likely that FDR never drove this vehicle because the lack of hand controls.

A distinguishable feature on the vehicle is the classic style of the driver sitting outside in the weather elements while the passengers would sit inside, protected by the roof. This classic element dates back to the horse and carriage days.

The 1932 Plymouth Brewster Town Car, currently on display at the Automotive Driving Museum in El Segundo, CA, is a very rare and peculiar vehicle. Due to the Great Depression Era’s distaste for the rich and privileged, it is rumored that Eleanor Roosevelt custom ordered this 1932 Plymouth in lieu of a more luxurious Cadillac or Packard to appear more approachable to the general public. The irony is how expensive the car truly was. Though there is no record of the vehicle’s purchase price, the chance of this custom, one-off Brewster being less expensive than a brand-new Cadillac is doubtful.

Forever celebrated in the Cole Porter song, “You’re the Top,” Brewster & Company gained a reputation for being at the top of its class: