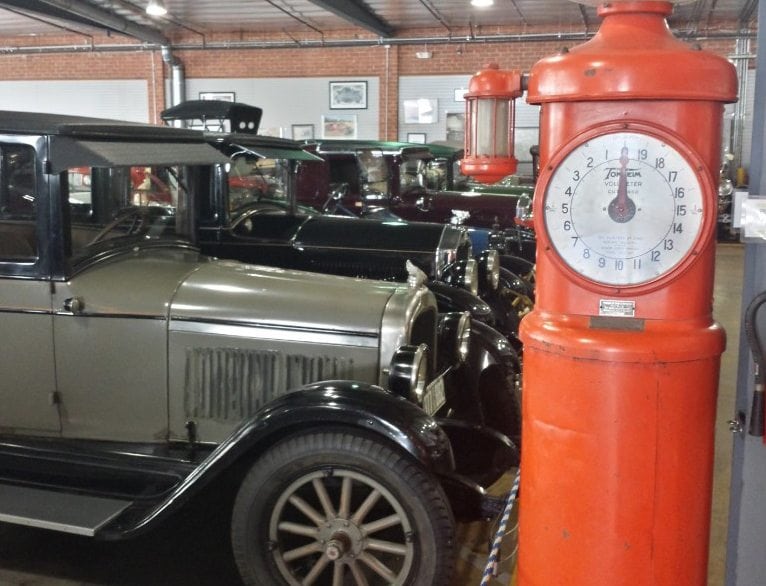 What makes gasoline pumps collectible – is it color, brand, condition, era or all of the above? It all comes down to what you’re looking for. If you’re the one selling a pump that you have just bought at a swap meet, you may want to know more about what era it may be from.

Also, if you’re in the market for your first pump, knowing a little history may help you decide which pump is right for you. If you’re in the Southern California neighborhood, be sure to check-out the Automobile Driving Museum (the ADM (hyperlink: www.theadm.org)) in El Segundo, CA, for a closer look at some unique, original pumps.

“Originality is the key to most collections,” said Don Sherwood, of the online gas pump museum, vintagegas.com. “I honestly believe it’s more difficult, just like with a baseball card, to find [a pump] that nobody has ever messed with. Regardless of what brand it is – Gilmore, Harbor, Sinclair, Signal, or Hancock – it’s going to be harder to find untouched West coast brands than its going to be to find a TEXACO because that company was nationwide.  There may be 300 TEXACO pumps for every one Harbor pump.”

The gasoline pump has evolved over the years, beginning in 1885 with the first kerosene pump manufactured by Sylvanus Freelove (S.F.) Bowser of Fort Wayne, Indiana. The device was originally used to suck kerosene from barrels at general stores, delivering the fluid to a customer’s portable metal can.  The product would then be brought home to fuel stoves, lighting fixtures, and possibly a horseless carriage (if the customer was fortunate enough to afford one).

Though his pump was not originally designed to serve automobiles, by the 1890s, Bowser noticed his invention of the kerosene pump could accommodate the horseless carriages. He added a hose to his pump, and eventually a nozzle. Clerks would count the number of cranks (pumps) they made with the handle to determine how many gallons had been delivered into a customer’s tank (one crank would equal one gallon).

Generally, the clerk would also put an ear to the automobile’s tank to listen for the sound of gas filling. Some clerks looked down the hole to see the height of the gas level, determining when the customer’s tank was full. These methods proved to be both inefficient and dangerous.

By 1910, a clockface (to measure the amount of gasoline being pumped) was added to newly manufactured pumps. The retailers who resisted the investment of a new pump outfitted their crude, older pumps with accessorized clockfaces. The demand for an even more precise way to measure what was being purchased led to the design of a visible gas pump.

By the 1915s, some visible gas pumps stood upwards of 10-feet tall. The cylinders were marked, by gallon, similar to a large science beaker. Beyond being a measurement device, these pumps demonstrated the clarity of the gasoline; at the time, customers became increasingly aware that pollutants in gasoline would harm their engine.

Another function was to allow the customer to quickly see which pump was ready to fill a gas tank, based on which cylinders were full. The cylinders had a release valve attached, gravity feeding the tank of a customer’s vehicle when released.

As more vehicles were on the road, crowded streets pushed curb-side pumps further back, and forced the gasoline to be stored underground. The designers of gas pumps soon added an aesthetic appeal to attract consumers to gas stations. With the addition of the clockface and visible cylinder, the art deco movement took gas pumps by storm.

Through the 1920s, the colors and ornate designs of gasoline pumps stretched around the globe. Everywhere, bright colored pumps full of gasoline were at every station. By the 1930s, the visible pump decreased in size, giving way to a smaller version with a turbine inside. These miniature, visible pumps were usually hanging off the side of a pump, with a hose connected to the bottom, which fed into an automobile’s tank.

These miniature cylinders were referred to as “sight glasses”. The main reason for the smaller, visible cylinder was an increased consumer confidence in the gas pump retailer. Consumers began to trust that the gasoline was clear and the amount they paid for was accurate. It was the introduction of electric pumps around the 1920s and 1930s that gave way to the ultimate precision of measurement, eliminating the cylinder all together.

An original, clock face pump can be seen at the Automobile Driving Museum (the ADM (hyperlink: www.theadm.org)) in El Segundo, CA. This pump, likely from the early 20s, features red paint, a sight glass, and ornate globe atop the square stylized pump.

Due to a lack of street lights at night, globes not only helped advertise the gasoline’s manufacturer, but also served as a beacon for travelers in desperate need of refueling. These globes were added in early versions of the 1910s styled pumps. They were the last decorative element of the gasoline pump to remain through the 1940s.

As the cylinders shrank into sight glasses, and then were all together removed, the globes remained. At least five pumps with large, clear glass cylinders, ranging from the 1915s through 1930s, are located at the ADM (hyperlink: www.theadm.org) in El Segundo, CA. The museum also includes many 1930s through 1950s electric, computerized pumps with the original globes.

While an authentic, documented pump in pristine condition may be what collectors are after, the Wayne-60 specifically, many collector’s, such as Sherwood, of VintageGas.com, love collecting anything petroleum related. From miniature salesman samples of pumps to full scale, vintage pumps themselves – Sherwood owns it all.

His current collection includes more than 60 vintage pumps, which he proudly opens to the public a few times a year to help raise money for local charity. His collection, along with his friend’s and also stranger’s pumps, are all photographed and organized on his online museum, VintageGas.com; a site which he established to stir the conversation and keep the hobby of collecting alive.

“I get phone calls and emails all the time from people” wanting to know how much their “grandfather’s TEXACO pump is worth from 1935,” said Sherwood. But, as he describes, it’s difficult to tell because “TEXACO never made a pump. Most pumps were painted red” by a manufacturer, and then labeled by the pump distributer with the brand of gasoline it served. The retailer who purchased the pump may switch gasoline brands over the years, in which case it would be repainted and a new globe would have been installed on top.

Each time this happens, the new layer was added atop the old, and the authenticity became tougher to track. “The authenticity of a pump leaves a lot to be desired,” said Sherwood. “You never know what you have until you start to get into it. I’ve purchased several pumps with a lot of different banding underneath the paint.”

No one is going to say anything to you if you do it that way.” Restoring a pump to look the way you want is most crucial. Regardless of its history, the pump will always be worth what someone is willing to pay for it. “I don’t have a lot of money, but every piece I have I bought because I loved it,” said Sherwood. “The hobby is alive and well.”

To view vintage, collectable pumps up close, swing by the Automobile Driving Museum (hyperlink: www.theadm.org) in El Segundo, CA, for a closer look. The volunteers at the museum will be more than willing to teach you about each pump and to give you a tour of the collection. For anyone getting into the hobby of collecting pumps, seeing them in person is a great place to start. Also, while you’re at the museum, if you come on a Sunday you can possibly take a ride in one of the museum’s vehicles. The Automobile Driving Museum is one of the World’s only museums that let you take a ride in a display vehicle.

1930 to 1940 – art deco styled with color, some with both clockface and glass cylinders, glowing globe on top

1940 to 1950 – square styling and color, electronic with clock face and cylinder, some with sight glass (smaller cylinder), still has glowing globe on top

1950 to 1960 – box style only, glowing computerized measurement and price calculation